Flagship of the First Sailing Arorund the World

The nao Trinidad was the flagship of the Magellan-Elcano expedition, leading the first sailing around the world between 1519 and 1522, which was the greatest maritime feat in history. An expedition that circumnavigated the globe for the first time, opening new routes, connecting continents and oceans, and getting to know the peoples and cultures that inhabited the lands they touched along their immense journey: Brazil, Argentina, the Mariana Islands, the Philippine Islands, Indonesia, Brunei and Timor.

It set sail from Seville (Spain) on 10 August, 1519, at the head of a fleet of five ships which, following its guidance, crossed the Atlantic, sailed along the coast of South America, discovered the Strait of Magellan and crossed the Pacific Ocean for the first time in history. They reached the Mariana Islands, the Philippines and the Moluccas, where the destiny of the Flagship Trinidad would change.

After more than two years at sea and with the fatigue of sailing thousands of nautical miles, the Trinidad sprang a huge leak in its hull. This prevented its return to Spain from the Moluccas with the expedition’s only other surviving ship—its companion, the Victoria. The latter did make it home, completing the First Sailing Around the World just months later.

Meanwhile, the Trinidad was involved in the toughest incident of the voyage. With the damage repaired, it attempted to return to Spain by sailing eastward, with 54 men on board, but was defeated by strong headwinds and currents. It was forced to sail northward until it reached the 42nd parallel north, when a violent storm nearly caused its wreckage. Cold, hunger, thirst and scurvy mercilessly struck the ship and its men.

Giving up, the ship returned to the Moluccas after six months of suffering and fighting against the sea, with just 17 survivors. There, the Portuguese were waiting for them; they captured the crew and abandoned the battered ship in those waters, where, exhausted and damaged, it met its end.

A GLIMPSE AT THE PEOPLES OF THE WORLD

On the nao Trinidad traveled Antonio Pigafetta, the main chronicler of the expedition, which managed to complete the First Sailing Around the World with the nao Victoria. Throughout the entire journey he wrote a beautiful account of the journey and its events, and a magnificent description of the geography, nature, and the indigenous peoples who were met throughout the planet: their cultures, customs, beliefs, vocabularies. A magnificent ethnographic account by the peoples of the world that traveled this first circumnavigation. 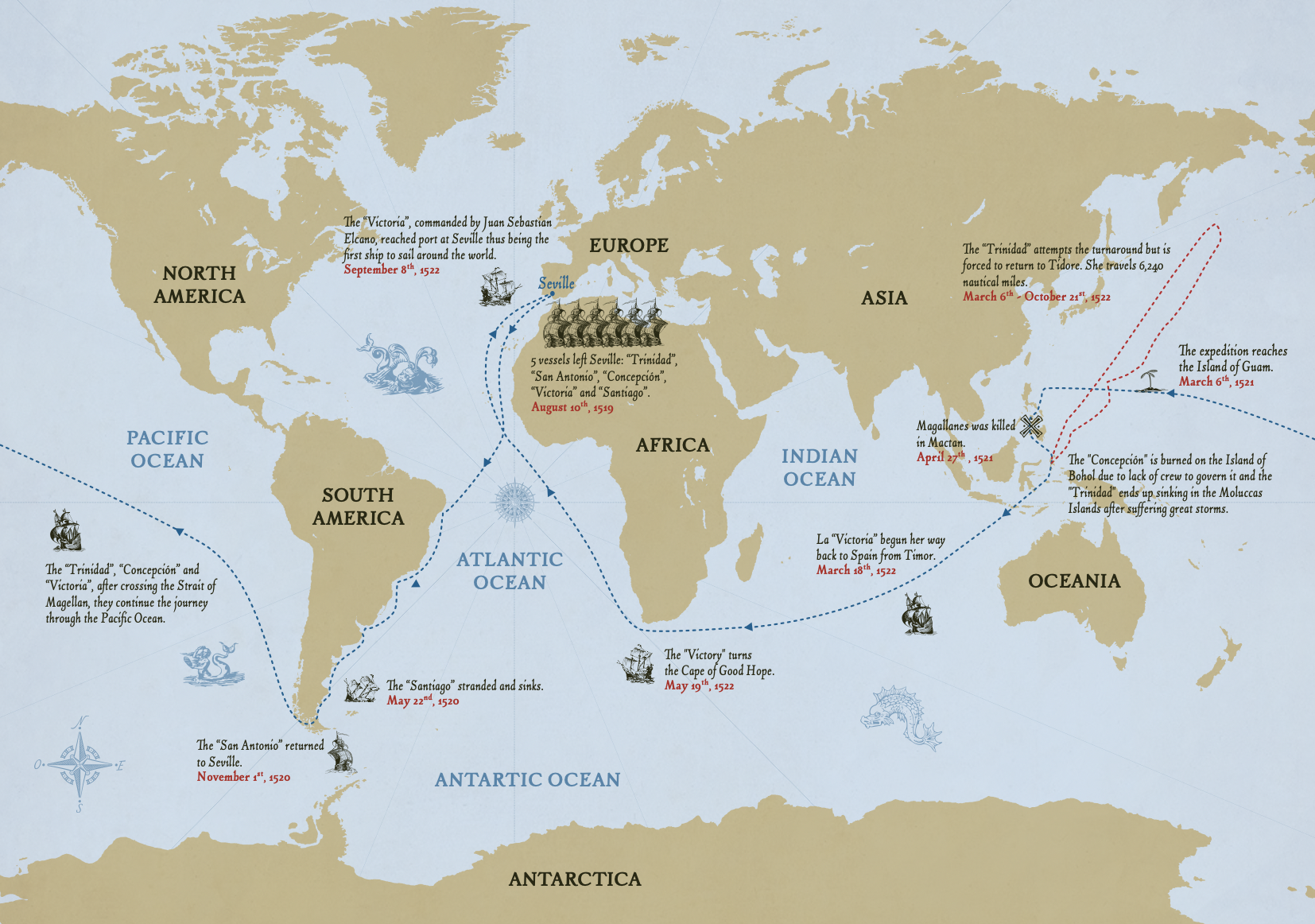